Lets understand this from bottom up,

Hardware infrastructure could be a laptop, a server in a data center, or a server hosted in any cloud platforms like from google cloud(GCP) or amazon web services(AWS).

Each virtual machine has its own operating system which also then contains the libraries and dependencies required for the application to run. For example you would need database drivers and programming languages like python, ruby, node js installed and libraries like python packages, ruby gems or npm packages.

Finally we have our application source code which is inside the guest operating system for isolation from other applications.

what is a virtual machine what it does? 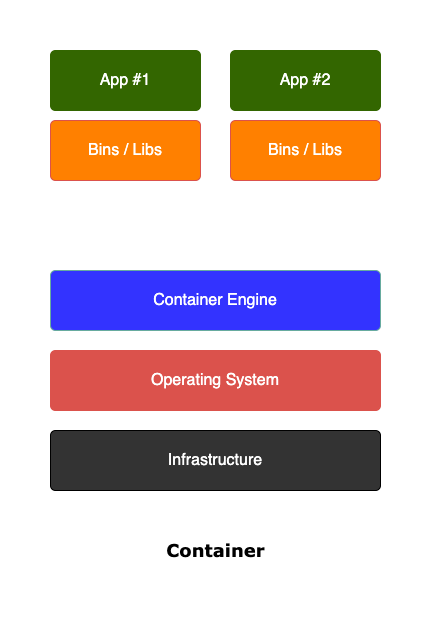 As you see, from bottom up both Infrastructure and Host operating system are same.

But instead of hypervisor we have container engine. Docker daemon,

Docker daemon communicates with the host operating system for sharing resources and it ensures that also containers are in isolation.

Containers will have their libs and dependencies packaged inside. So without the guest operating system a lot of storage and memory are free which can be utilised further.

Difference between VM and Container

Virtual machine comes with a heavy baggage because an entire operating system needs to installed for each application.

Virtual machines are very good at isolating system resources and entire working environments. For example, for a web hosting company you would most likely to use virtual machines to separate each customer.